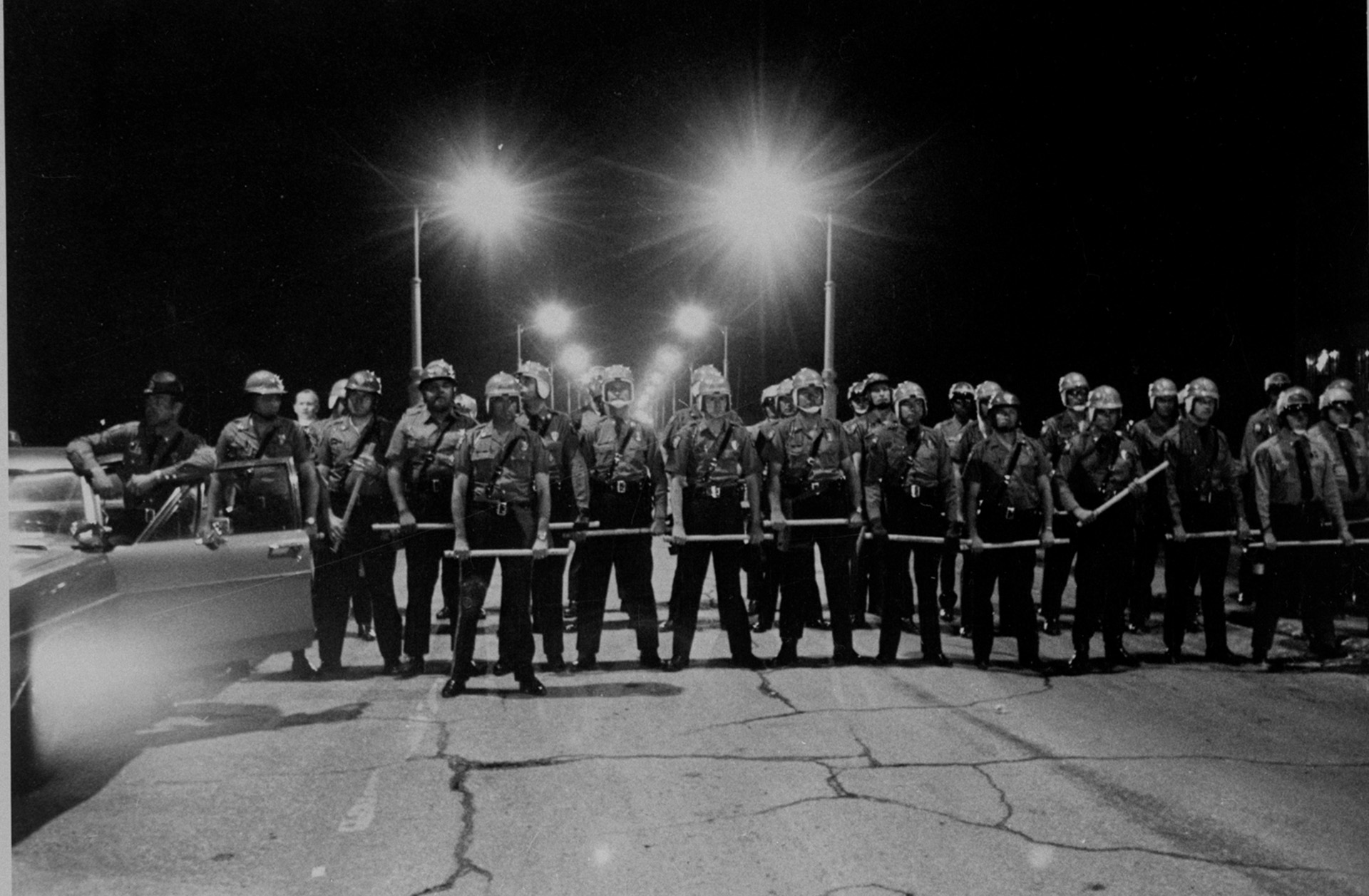 At the start of 1970, Lawrence simmered with unrest. After years of protest against segregation and inequality, the city had few positive results. An already strained relationship between authorities and many citizens in Lawrence fractured further, and peaceful protests turned violent. By the beginning of April, violent actions were a nightly occurrence. Every citizen in Lawrence, regardless of political affiliation or relationship to activism, found themselves in a battle zone.

After weeks of arson, bomb threats, and nightly gunfire, the conflicts in Lawrence escalated during the night of April 20 when the Kansas Union was destroyed by fire. Built as a WWI memorial, the Kansas Union was a center of campus life. When unknown parties set the building ablaze, it sent shockwaves through the city. The fire damage to that building alone cost an estimated $1 million (over $6.5 million today) and made property loss figures for April 1970 second only to the destruction caused by the Lawrence Massacre in 1863.

Local authorities, with the support of Kansas Governor Docking, responded to the Union fire with swift action. National Guard members and State Troopers were sent to Lawrence to aid the police force and a 7 p.m. to 6 a.m. curfew was issued for April 21. Community events such as school plays, live theater showings, and sporting events had to shift schedules to end on time. Movie theaters and restaurants, which normally had peak visitation in the evening, were closed to comply with the curfew.

The days between the nightly unrest were a strange mix of planning and anticipation. Telephoned threats disrupted the daily operations of schools and businesses including the Lawrence National Bank and the Lawrence Paper Company.

Within minutes of the curfew’s start, patrons at the Rock Chalk Café threw bricks at police cars. Gunfire and arson continued through the night, mostly in the area just north of the Kansas Union fire site. At 13th and Ohio Streets, a group of young Lawrencians set up a barricade blocking Oread Avenue.

The second night was defined by a confrontation between police and a gathering of protesters that included students, drifters, and those who lived in the Oread neighborhood. In an area of Lawrence known as “Hippie Haven”, strands of piano wire and barbed wire were strung at about neck-height between buildings and in alleys. The newspaper theorized that calls bringing law enforcement to that area were intended to lure officers into an ambush.

Newspapers reported that the third, and final, night of the curfew reflected a slightly calmer atmosphere. Firefighters responded twelve times, from noon until the next morning, with seven of those calls reported as fire bombings. Bomb threats also continued as police investigated two threats to private citizens and threats to KU’s Malott and Murphy Halls.

Only 18 people were arrested for violating curfew, dropping from 45 arrests the previous night. This decline was enough for authorities to end the curfew leading into the weekend.

Authorities, including City Manager Buford Watson, studied the curfew for areas of improvement within city governance. New procedures, including building a stronger tie with the Human Relations Commission as a center for conflict de-escalation, were considered.

The end of April calm proved to be the eye of the storm and the unrest leading to the curfew a preview of things to come. Within a month, further protests erupted in Lawrence. KU authorities, reacting to these protests, ended the semester early and cancelled finals – a memorable moment for many students at the time.

In July, protests after the fatal Police shootings of Rick “Tiger” Dowdell on July 16 and Nick Rice on July 20 were bookends of five nights filled with shootouts, bombings, and property destruction that rivaled the year’s earlier events. City authorities declared a state of emergency in Lawrence on the two-month anniversary of the April crisis but did not enforce a curfew. In December, there was another wave of protests and the bombing of Summerfield Hall on the KU campus.

In the years that followed, activists and community leaders came together to create institutions to aid the community, including the Bert Nash Mental Health Center, the Sexual Trauma and Abuse Care Center, and the Audio Reader Network.