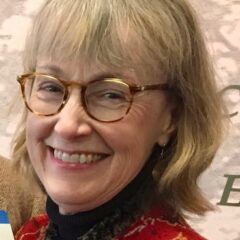 Dr. Kathryn Nemeth Tuttle, associate vice provost emerita, was instrumental in efforts to improve academic advising, student academic support, and student persistence at the University of Kansas.  Her research focus is the history of women in higher education.  More recently, she has researched the history of women in Lawrence in the 19th and early 20th centuries.  Tuttle, a resident of Lawrence since 1968, served as president of the Douglas County Historical Society Board and president of the Old West Lawrence Association.  She is a co-author of the books Transforming the University of Kansas:  A History, 1965-2015 and Reflecting Back, Looking Forward: Civil Rights and Student Affairs.  Kathryn received her doctoral degree from KU and taught undergraduate and graduate courses for the School of Education.  She was elected to the KU Women’s Hall of Fame and was named a KU Women of Distinction.  Kathryn and her husband Bill have four children and six grandchildren