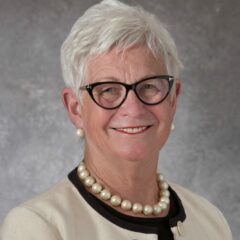 Hon. Deanell Reece Tacha is a retired Judge of the United States Court of Appeals for the Tenth Circuit.  She served as Chief Judge of that Court from 2000-2007.  Following her retirement she was Dean of the School of Law at Pepperdine University in Malibu, California.  Prior to her appointment to the Federal Court bench, she was a Professor of Law and Vice Chancellor for Academic Affairs at KU.  For her service to the Federal Judiciary she was awarded the Devitt Award, the highest honor bestowed on a Federal Judge, and the John Marshall Award for Distinguished Service by the American Bar Association.  In Lawrence, Judge Tacha has served on the Boards of the First United Methodist Church, the Children’s Shelter, the Lawrence Memorial Hospital Endowment, the Douglas County Historical Society, the Lawrence Arts Center, and numerous other community and university organizations.  She was one of the founders of Freedoms Frontier National Heritage Area.  She is a recipient of the Lawrence Chamber of Commerce’s Distinguished Service Award and the Athena Award.   She currently serves on the Board of the Douglas County Community Foundation and the KU Endowment Board of Trustees Executive Committee where she is a past Chair of KUEA.  She and her husband, John, have lived in Lawrence for more than 40 years and have four children and six grandchildren.