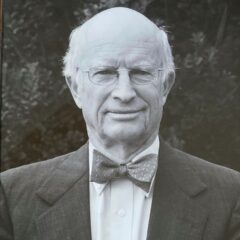 Stephen is a native and fifth generation Lawrencian.  After graduating with a BA from the University of Kansas and an MBA from Harvard, he returned to Lawrence to join the Lawrence Paper Company.  Later, in 1976, he took a position as financial advisor with Morgan Stanley in Lawrence that led to forty years of helping others manage their financial resources. His daughter Emily joined him there in 2002 and later she formed Bowersock Capital Partners her own advisory company.

Along the way, Stephen acquired in 1972 The Bowersock Mills & Power Company a producer of hydroelectric energy originally founded in 1874 by his Grandfather Justin D. Bowersock. Stephen’s wife Marcia and later his daughter Sarah Hill-Nelson joined him there in management capacities.

Now retired, Stephen serves in a number of civic activities including Rotary, the Bishop Seabury Academy board, and as a trustee of the Kansas City Symphony Foundation.